Hello and Welcome to my Blog ~ I love art of all kinds. Two of my favorites are polymer clay and paper art. I have shops on Etsy that feature both of my passions. I also love writing my blog and finding artists that have a passion for their craft and feature them. I hope your day is filled with sunshine, laughter and loads of creativity.

We wouldn't have Fimo Clay if it weren't for Fifi

If you didn't know the history of Fimo Polymer Clay,
you will be as surprised as I was at how it came about.

In her search for a new material to use for her dolls' heads, the well-known doll maker Kaethe Kruse begins experimenting with a new substance.

As the material turns out to be unsuitable for serial production, her daughter Sophie does some experimenting of her own with it, mixing pastes and colours into it and then kneading it into whole variety of shapes and objects. She uses the material to create vases, mosaics, pictures, miniatures, figures and toys. Sophie Rehbinder-Kruse sums up her philosophy as follows: ‘‘Mankind instinctively wants to model things; it is his way of cherishing and preserving something dear to him”. As a result, she goes on to develop her first modeling clay kit in 1954.
She created the brand name FIMOIK by using the first two letters of her nickname ‘Fifi’, the ‘Mo’ from modeling clay and the final letters of ‘mosaic’, one of her favorite techniques.
It wasn't until 1964 that Rehbinder sold the formula to Eberhard Faber. The manufacturer tweaked the formula dropped the "IK" and renamed it FIMO.
Origin verified: http://en.wikipedia.org/wiki/Fimo


Sculpey
In the mid 1960s, Zenith Products Company in the United States "accidentally" created its own variety of polymer clay. The company developed "Polyform" in hopes of using it as a thermal transfer compound. While it didn't work in its intended industrial capacity, a young visitors interest illustrated that the product had great potential as an arts and crafts medium. (The owner's daughter sculpted an elephant from the clay.) "Polyform" was the original version of what is now known as "Sculpey". Though the white Polyform/Sculpey was sold as early as 1967, it didn't get its present-day brilliant line of colors until 1984. Until that time, artists had to add their own pigments to colorize the clay. polyform products began manufacturing an American polymer clay (the Sculpey and ProMat line of products) and in the late 1990s, polyform introduced their Premo line . With this line came the first, strong and truly translucent polymer clay, and in 2003, renowned polymer clay artist Donna Kato introduced her own line of polymer clay.


"A Thing a Day"
For the past three years Polymer Clay Central has held a "Thing a Day" for the month of February. This is my first year to do this and I am having such a great time with it. At the end of the day, it is so much fun to see what everyone has created.
Below are a few creations that I have created for TAD

Little Imp ~ Big Heart
This little polymer clay Imp has a big heart and very tiny wings. As it is, he can't get very high off the ground and with this big heart he's carrying around it's utterly impossible. I created him with polymer clay and large glass beads for eyes. 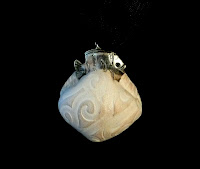 Pearly Puffy Pendant with Fish Bail
I created this pendant with white polymer clay and embellished with a swirly stamp and gold mica powder.
I thought the fish bail was a perfect fit for this creation.

Blue Beaded Heart
To create this pendant, I made a heart out of black clay, filled it with blue/green beads, then used clear embossing powder as a fixative.
Posted by Sandy's Creations in Clay at 2:44 PM

Mom, Thanks for sharing the great information on the history of polymer clay!

Love all your adorable creations for "Thing A Day" at Polymer Clay Central! I'm enjoying looking at everyone's creations there too! :) Great stuff!

Most interesting. Thanks for sharing that info. Especially enjoy your Blue beaded TAD heart. Wonderful way to use those tiny beads.

This is the first time I have the opportunity to
write to you.

The story of Fifi, makes me think in the time that she began the project. There was no Internet, fax, cell phone,and I believe that until there was no phone with ease we have today. How she did the research? She was a courageous woman and with unusual persistence.
I particularly pray in gratitude to this woman every day.
You know why?
Because all started with her.
I live here in Brazil, far from all of you
and I'm developing the market here, so that people can learn to work with polymer clay, express their talents and could still have an extra income at the end of the month, and with that they can help their families.
I started three years ago to manufacture the brand Bozzi Polymer Clay and like I said, it's hard work even with all the facilities we have today.

My respects to Fifi.

All the best to you and your daughter, Trina, I've talked to her through email.

Sandy's Creations in Clay
I grew up in the once small town of Danbury, Connecticut where I met and married my husband. At a very tender age, we ventured out into a world of our own. Three children and three grandchildren later we ended up in Plano,Texas, but in-between there was Arizona and California. Now with loads of ventures and adventures behind me I have started my crafting phase. I began creating masked faces out of polymer clay in the Spring of 2010. I find myself amazed that out of a ball of clay, I can create something of beauty. I owe this wonderful inspiration to my daughter who has been working with polymer clay for years.

Thank You For Following My Blog

I Am A Member

Join Me On Networked Blogs

I Am A Member Of Polymer Clay Central 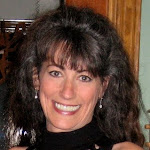 My inspiration, my Daughter...

Ever since his Dad handed him a camera, somewhere around the age of ten, my son Charlie fell in love with the wonderful world of photography. His extensive knowledge of graphic art has played a huge part in his technique and expertise. You will find that his photography is very creative and innovative. his love of Art and Photography has brought him where he is today, with his own Studio and Website.
You can view his awesome photography at:
http://charlieprenziphotography.com 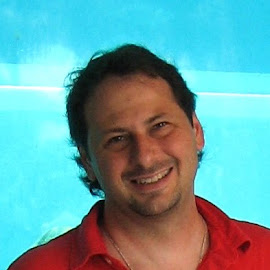 Link to my Etsy Shop

Welcome To My Little Corner Of The World